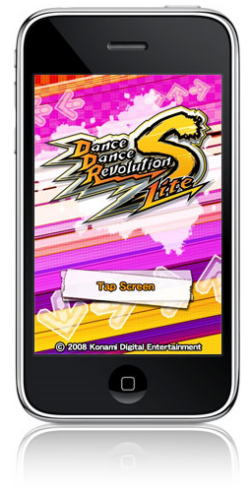 Konami has announced the release of Silent Hill: The Escape and DanceDanceRevolution S Lite, now available in North America (what about the UK??) for the iPhone and iPod Touch. Based on top-selling franchises, these titles have been re-designed to take full advantage of the iPhone’s capabilities, including the innovative Multi-Touch Interface™ and accelerometer.

Silent Hill: The Escape
Silent Hill: The Escape features original gameplay, detailed graphics and spine-chilling sound effects created specifically for the iPhone. In this first-person, 3D shooter survival horror game, players navigate through various levels from an abandoned hospital to a cold subway with a dull flashlight while fighting off monsters and faceless nurses. The battery of the flashlight slowly dies throughout the game, limiting the player’s vision as they search for a key to escape the monster-infested labyrinth. Players also carry a gun for protection to ward off the trail of chasing monsters. Taking full advantage of the iPhone’s capabilities, players must employ the tilt sensor and skillfully tap the bullets to reload the revolver. Silent Hill: The Escape is available for $7.99 from the Apple App Store.

Silent Hill: The Escape and DanceDanceRevolution S Lite are now available from the Apple App Store on iPhone and iPod Touch.

If you want more info about the games, check out Konami Mobile here.