It’s been a long time coming. Acer has been hyping up its upcoming smartphone ever since it gobbled up Windows Mobile smartphone manufacturer E-Ten last year. And, it looks like Acer has chosen Mobile World Congress in Barcelona to launch their new handset.

Acer sent us an invitation to come feel “the rhythm of your life” in Barcelona, which we assumed was their way of inviting us to the Acer smartphone launch event. Acer is apparently ready to show off their new smartphone on February 16th in Barcelona, Spain. The agenda lists free drinks, an open buffet, and a Q&A session as part of the event, so you can bet your sweet bottom we’re going to be there. 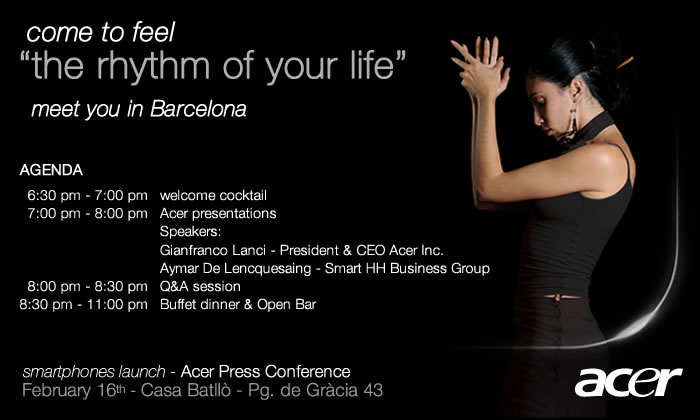 The iPhone 3G has been a boon for the second-largest US wireless carrier. With over 4.3 million iPhone 3G activations...