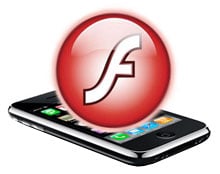 If you’ve been waiting and waiting for Flash to hit the iPhone, you’re not alone. Over the past few days however, some promising words have come out of the mouth of Adobe CEO Shantanu Narayen. In an inverview with Bloomberg Television, he noted:

“It’s a hard technical challenge, and that’s part of the reason Apple and Adobe are collaborating…The ball is in our court. The onus is on us to deliver.”

Well, that’s… Something I suppose. The ball is clearly in Adobe’s court as Narayen clearly describes. While flash is installed on 98% of the world’s personal computers and 800 million handsets, the iPhone is one frontier that Flash hasn’t crossed… Yet.

Last March Apple CEO Steve Jobs noted that Flash simply ran too slowly for the iPhone, and that the trimmed down ‘Flash Lite’ simply isn’t capable enough for use on the web. Coming up on a year from those statements, I’m hoping to hear more positive news from Adobe in the months to come regarding Flash on the iPhone. Lets keep our fingers crossed.

Duck Hunt Removed From the App Store at Nintendo’s Request

Anyone that knows me, knows that I love the classic gaming scene. I've got my Wii full to the brim...