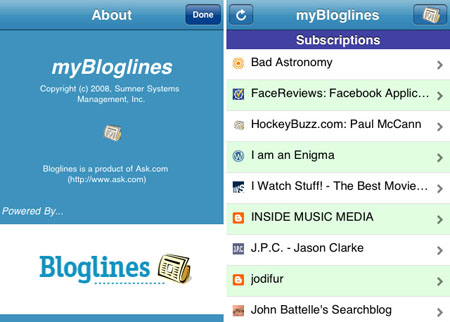 David Hinson, who doesn’t seem affiliated with Ask.com (owner of Bloglines), launched an application called MyBloglines to allow iPhone and iPod Touch users to grab their feeds from Bloglines using a dedicated native app. While it’s far from perfect, it’s definitely faster way to browse feeds than through Bloglines’ iPhone-optimized website. However, there are few things I don’t like about it:

Now, this is not to say I’m totally against MyBloglines. While it’s definitely not suiting my needs, it doesn’t mean it’s not for you, too. At this point I hope David will re-think its work and make it better. Only then I would be willing to jump on board.

Here’s an AppStore link from where you can get more details about the app. Alternatively, you may want to check out a short video demoing the app, which follows after the jump.

UPDATE: Got the email from David. He needs some additional help from Ask regarding Bloglines’ API to make the application even better. David also mentioned his same-named Facebook application, which you can use to share your feeds with your friends…

Back in December, we wrote that Alltel has started offering the location-aware Trimble Outdoors application for fans of the outdoor...