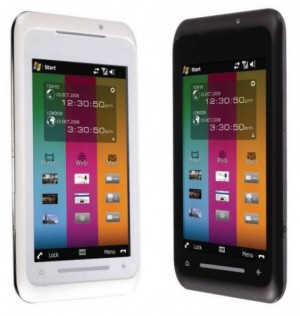 Qualcomm has finally made it to market with its heralded system-on-chip Snapdragon chipset. The Toshiba TG01 has just been announced as the iPhone-trumping Windows Mobile 6.1 smartphone packing a 1Ghz Snapdragon QSD2850 in an impressively slim and stylishly curved 9.9mm-thick package. The Toshiba TG01 features a 4.1-inch WVGA resistive (pressure-sensitive) touchscreen display with 800 x 480 resolution that should give even the monster-display on the HTC Touch HD. And, with a quad-band (850/900/1800/1900Mhz) GSM radio, 3G (HSPA) data connectivity, WiFi, microSDHC card slot (up to 32GB) and A-GPS rounding out the feature set, the Toshiba TG01 proves to be a real powerhouse of a smartphone.

The Toshiba TG01’s Snapdragon chipset, with a dual-core processor that crams a 1Ghz ARM core next to a 600Mhz DSP core, should make quick work of near-HD video encoding and playback. The display features the color matching, dynamic gamma correction and LCD backlight control technologies that we’re used to seeing in Toshiba’s HDTVs, lending to the TG01’s multimedia prowess.

The TG01 employs a customized GUI (graphical user interface) that rides atop Windows Mobile 6.1 much like HTC’s TouchFLO 3D UI. The TG01’s home-brew UI is intended for one-handed use and relies heavily on the same sideways-sliding finger inputs that have been so popular with the iPhone OS and HTC TouchFLO 3D UI. Unfortunately, the resistive touchscreen gets low marks from Slashgear for its gaming potential, or lack thereof.

The Toshiba TG01 should give Apple some serious competition for the multimedia throne that the iPhone has so deftly captured. The blazing 1Ghz processor complemented with 600Mhz of dedicated DSP processing power endows the TG01 with laptop-like computing power that will likely have the folks in Cupertino rethinking their iPhone strategy.

We’ll be looking forward to getting some face-time with the Toshiba TG01 at Mobile World Congress in Barcelona, stay tuned!

Apple is firing on all cylinders recently. Having just announced that the company has met its self-imposed goal of selling...