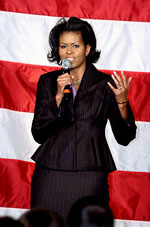 We all know of President Barack Obama’s love for the BlackBerry. Seems as though his wife, the one-and-only First Lady Michelle Obama has a love for the device as well. Can you blame her? Ann Compton (with ABC news) has reported that Michelle is a BlackBerry user and will keep her BlackBerry at her side while in the White House.

“Mrs. Obama does use a BlackBerry and any emails relating to the carrying out of the official or ceremonial duties of The First Lady would be subject to the Presidential Records Act.”

Interesting. Due to the Presidential Records Act all emails, messages, etc will be preserved by law… So I suppose down the road we can all take a look at the official records to see what she was up to. I wonder what type of Berry she uses?

Forget about catching on fire, this particular cellphone battery actually exploded with enough force to sever some apparently vital (as...