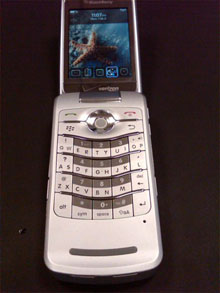 For those of you eagerly awaiting to purchase the CDMA-ed out Verizon BlackBerry Pearl Flip, your wait appears to be over…Or at least the wait will be over soon. Brand-spankin’ new images of the BlackBerry Pearl Flip 8230 have leaked, and you know what that means. An official launch can’t be that far off. A CTIA launch in April would make the most sense to me.

The image and a few deatils came from user BlackBerryInsider over at the CrackBerry Forums. The user posted the image seen here, along with the following comments regarding the 8230:

I just received my Verizon Flip Pearl (8230 Flip). I don’t think Verizon has annouced it yet, but if not it should be coming soon. Not sure what the color options will be, but mine came in Silver. I personally like the Black (T-Mobile Version) better. I will be testing it over the next few days and let you know how it does.

The GSM version of the flip features EDGE data, 2MP camera, WiFi and more. So, expect the CDMA offering to serve up similar features, with the possible exception of a swap of WiFi for GPS.

Personally, the Pearl Flip has never really done anything for me. I’d never buy it. I do enjoy the flip form factor and its compact size… But not enough for me to make it a daily driver. At any rate, stay tuned for more on the BlackBerry Pearl Flip 8230 as the news becomes available!

We all know of President Barack Obama's love for the BlackBerry. Seems as though his wife, the one-and-only First Lady...