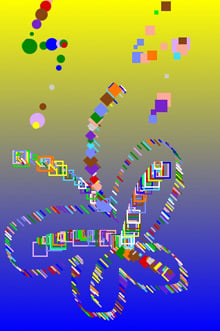 So, what were you doing when you were nine years old? Me, I probably got up early to watch cartoons before school… went to school, then ran home with much anticipation for hot soup at lunch. Yeah, those were the days my friend.

Nine-year old Lim Ding Wen from Singapore looks to be a cut above the rest. Especially when it comes to iPhone development. I can almost guarantee you no one else in this youngster’s class is into iPhone App Development… I’m almost 100% positive 😛

This young prodigy has created a painting program called Doodle Kids, which has been downloaded over 4,000 times from the Apple App Store. The downloads have come within a two-week span since the app launched. Not bad at all. That’s 4,000 more downloads than I have in the App Store. The app lets iPhone users draw with their fingers, and then clear the screen by shaking the phone. Go ahead and check out Doodle Kids right here (it’s FREE).

According to Lim, there was a reason he created the app:

“I wrote the program for my younger sisters, who like to draw…” (His sisters are 3 and 5)

If this wasn’t impressive enough, Lim is already fluent in six programming languages. His father Lim Thye Chean also develops for the iPhone, and in the evening they check their App Store stats to see who has had more downloads for the day. Cool.

A big high-five to Lim Ding Wen and the family. Keep up the good work, I’m sure this isn’t the last we’ve heard of Lim!

The iPhone-world is abuzz with rumors about a next-generation iPhone coming down the product pipeline. The discovery of an "iPhone...