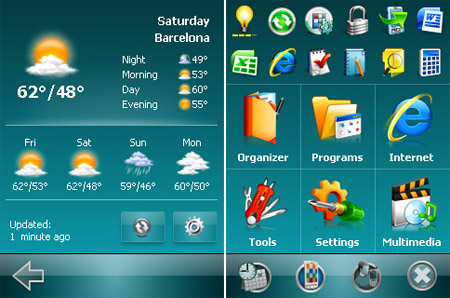 Spb Software announced that they will unveil the third version of their popular Spb Mobile Shell Windows Mobile app during this year’s Mobile World Congress in Barcelona, Spain. We don’t have screenshots at this stage, but according to their press release the upcoming version will “set a new standard in handset user interfaces” and will go “far beyond what is available on any phone today.”

Ok you got our attention. Maybe we should expect some user interface a la Toshiba TG01. After all, Toshiba used Spb Mobile Shell in the past for its Portege G810 model? Just a though, we’ve no insider information, unfortunately.

Anyway, Spb Mobile Shell 3.0 is scheduled for release to manufacturers in late February of 2009, with release to the consumer market expected to follow in late March. If you’re attending MWC in Barcelona, make sure to visit Spb Software’s booth #2B38 in Hall 2.

[Images above are from Spb Mobile Shell 2.0]