Made famous for its absurdity, the iPhone’s lack of a conveniently removable battery has been one of the iPhone and iPhone 3G’s harshest critiques. With the iPhone’s power-needs draining full batteries in as little as a day, the lack of a removable battery is made even more apparent. But, there’s hope yet. A new Apple patent application hints at future iPhone with a universal rechargeable battery – one that you can actually remove and replace on a whim!

The Apple patent application details plans for a universal rechargeable battery that can be swapped interchangeably between, presumably, Apple devices. In fact, one patent diagram depicts a mobile phone with a port for the universal battery pack. If Apple does have real plans to bring this particular patent to life, it’s not too far a stretch to see a future iPhone outfitted with the removable battery technology. 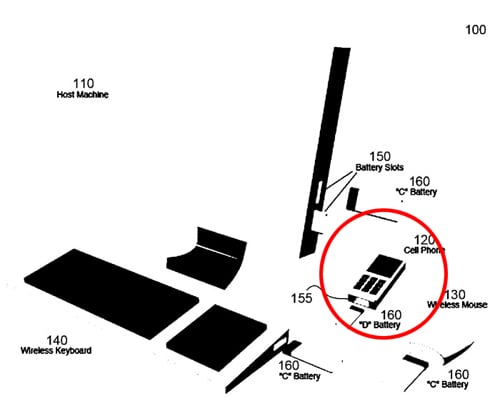 This generic cellphone hints at a future iPhone with a removable battery.

Apple’s patent for a universal rechargeable battery uses a Mac desktop as a central charging station for multiple universal batteries. The computer would feature charging-ports to manage and charge multiple batteries simultaneously. Batteries running low on juice would sent an alert to the computer, instructing the user to replace the battery with a charged battery.

At the heart of the universal battery technology is the integrated circuitry within each battery that communicates with its host device to determine what kind of power output is required. Since each device has specific power requirements

Looks like Google Sync isn't just for BlackBerry users anymore! Google has just flipped the switch on Google Sync for...