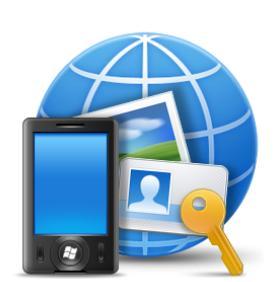 It seems the higher-ups at Microsoft took a bit of a disliking to the SkyBox name and have decided to rebrand their cloud-syncing service as “My Phone.” These days, data synchronization services that store information on third-party servers (the “cloud”) are becoming increasingly important, and Microsoft apparently wants to ensure that their own cloud-sync service markets well. SkyBox was originally intended to keep information synced up between Windows Mobile smartphones and the web, with SkyMarket offering Windows Mobile applications and SkyDrive handling the online file-storage end of the business – which would have created a unified data-synchronization brand for Microsoft.

To that end, Microsoft will now be positioning My Phone to directly compete with Apple’s own iPhone data synchronization service, MobileMe. With a new name and a new logo, Microsoft’s smartphone-syncing service is ready to take on the likes of Apple and Google. Like MobileMe, My Phone will sync your Windows Mobile phone’s settings, contacts, and calendar data with the cloud – allowing users to access all that synced data through an online portal. Unlike MobileMe, My Phone will also allow for over-the-air backup and restore of the your mobile phone. Unfortunately, it won’t support push data services or syncing with a desktop computer.

My Phone is expected to be available for free to Windows Mobile users and will include 200MB of online (cloud) storage. But, that means My Phone will be splashing up advertising to help pay the bills. Look for more on the My Phone service and Windows Mobile 6.5 at MWC!

My Phone for Windows Mobile

Last week we saw the Communications Workers of America issuing picket signs to union members, leading up to a vote...