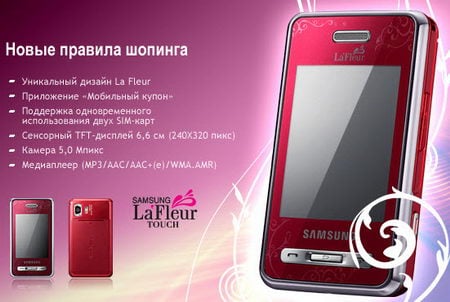 Samsung is obviously serious to push as many of its all-touchscreen F480 handsets as possible. We’ve seen the device in Hugo Boss and Rockstar P!NK edition, and now the Korean company is adding the La Fleur version, at least in Russia.

Obviously the idea behind this move is to get guys to buy their girlfriends a new phone — or at least the F480 La Fleur’s design (it’s purple/red with floral patterns) suggests so. But that’s not all. This time around, Samsung also prepared the special edition of its dual-SIM enabled device – D980. Basically, it’s the same phone as the F480, with an addition of a second SIM card slot.

Finally, to further entice the sales, every buyer of the La Fleur device — aside from the F480 and D980, some other models like the L310, L320 and F250 are on the list, too — also gets a mobile coupon, which is a discount card that can be used at various retailers.

At the moment, this offer is available in Russia, and we’re not sure which other countries will participate as well…

Nokia has released a new firmware update for its all-touchscreen smartphone, Nokia 5800 XpressMusic. Once the phone is updated, firmware...