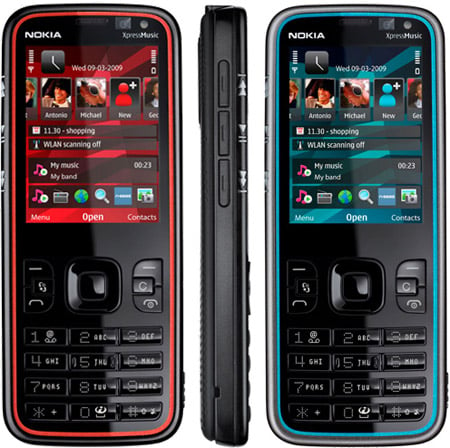 Nokia announced a new member to its music/N-Gage family called Nokia 5630 XpressMusic. At just 12mm slim and weighing only 83g, it is the slimmest and lightest N-Gage gaming device released to date.

Aside from the fact that it’s a Symbian S60-based smartphone, the 5630 XpressMusic also prides itself with a 3.2 megapixel camera with dual-LED flash and 4x digital zoom. As a music device it offers a solid S60 music player, standard 3.5mm headphone connector, stereo Bluetooth support, FM and Internet radio, as well as microSD expansion slot for storing all your music (a 4GB microSD memory card comes in the box).

As for the pre-installed software, aside from the standard S60 apps, there’s the built-in widget support, Ovi Share and Nokia Messaging.

Finally, it’s worth adding that the Nokia 5630 is both HSDPA and HSUPA enabled, allowing upload speeds of up to 2 Mbps! It’s one of very few Nokia devices that support HSUPA.

The Nokia 5630 XpressMusic will start selling in selected countries during Q2 2009 for around 200 EUR, before taxes and subsidies. “Comes With Music” version with unlimited music downloads for a year will also be available…