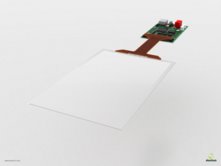 Multi-touch sensing technology provider Stantum Technologies is introducing a new version of its SMK series of multi-touch demo, evaluation and development kits — which enable vendors and OEMs to develop their own multi-touch applications.

Featuring a 4.3-inch touch panel, the new version will be unveiled at the Mobile World Congress (Hall 2.1, Stand 2.1F67) in Barcelona, where Stantum is demonstrating it on a Texas Instruments OMAP35xx platform. The demo is based on a beta version of the company’s new multi-touch framework called Touch Park and it shows the screen’s implementation in such apps as address book, drawing, picture resize and gaming.

In addition, Stantum is also exhibiting its 2.5- and 3.5-inch SMK kits, whose touch panels boast the highest performance in transparency (83% transmission) and ultra-low activation force (10g).