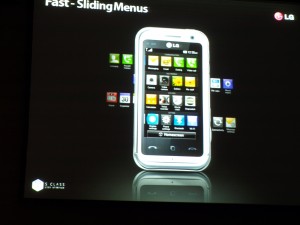 During LG’s Q&A session at Mobile World Congress, one gutsy press member fully called out the officially-launched Arena as an iPhone clone, as insinuated when some pictures leaked earlier this month. While it’s not a far shot, the Arena does have a few tricks that set it apart from Apple’s popular handset. For one, home screen icons slide left and right, allowing you access to larger groups of applications without having to change pages. The new 3D S-Class UI makes for some other interesting additions, like Rolodex-style contact browsing, and a cube layout for quick shortcut access. This OS will be making the rounds to other high-end LG handsets, but as stated earlier, LG is entirely comfortable supporting a multitude operating systems. Specs for the Arena include:

Call it a knock-off if you must, but from what we saw, LG managed to pull together a fluid, interesting and different user interface while still tapping something folks are already familiar with.

Nokia 6710 Navigator and 6720 classic get announced

Aside from unveiling two new ESeries devices, Nokia also announced two other devices. According to the official release, both the...