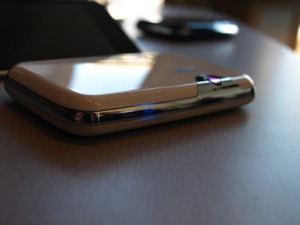 In the mobile game, it’s all about getting to market – even better if you can get to market before your competitors. Novatel has just announced that Telefonica Spain will be the first wireless carrier in the world to bring the highly-acclaimed Novatel MiFi Intelligent Mobile HotSpot to its GSM market.

Novatel’s people tell us that the GSM-based Novatel MiFi 2352 Portable HotSpot uses a tri-band GSM radio to serve up wireless data at up to HSPA data speeds.

Telefonica Spain is on board as the first wireless carrier to offer the Novatel MiFi 2352, nay any MiFi product in general. Unfortunately, pricing is still not available. But, word to the wise, we’d expect to see the MiFi 2352 launching in the $150-$200 price range before carrier subsidies. Does that mean we’ll see the MiFi family of Intelligent Mobile HotSpots hitting market for under $100? We can only hope…

After taking a video call with Steve Ballmer on their new Watch Phone, it's clear LG is pretty chummy with...