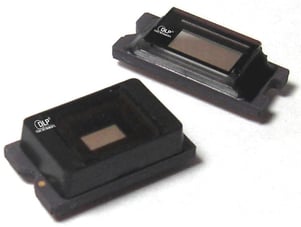 Texas Instruments announced the new DLP Pico projector chipset, designed to be used in mobile phones and other gadgets. Among the notable features are support for WVGA resolution, more then 20% thinner optical module height and more than 20% smaller optical module volume. In addition, the new member to the DLP Pico projector family is both more power efficient and has increased brightness, as well as the contrast ratio of better than 1000:1.

The bad thing, though, is that these chipsets have availability slated for late 2009. In other words, don’t expect to see any handsets using the new DLP technology this year… Full release follows after the jump.

PRESS RELEASE – Today at GSMA Mobile World Congress, Texas Instruments (TI) DLP Products announced the newest chipset in the DLP Pico family with availability slated for late 2009. Small enough to embed into the most compact mobile phones and gadgets, DLP Products has effectively scaled the display technology down to the size of a raisin without compromising superior picture quality and screen size.

Designed in response to demand from mobile device manufacturers, the new chip demonstrates DLP’s continued leadership in the pico projector category. This announcement comes on the heals of, the first DLP Pico chipset being named a finalist in the Global Mobile Awards for Best Mobile Technology Breakthrough awarded by the GSMA.

DLP Pico projection products were featured at the International Consumer Electronics Show in January and regarded by industry analysts as one of the hottest new categories in consumer electronics. According to U.S. based research group Pacific Media Associates (PMA), the market for such devices is expected to surpass millions of units in the next few years.

To see DLP Pico technology in person at Mobile World Congress, please stop by the TI Booth located in Hall 8-8A84. TI will be hosting a press conference at the booth this evening from 6:00 PM (CET) with registration beginning at 5:30 PM.

Qualcomm at MWC: Mirasol displays coming to smartphones, Sony to use GOBI, femtocell chipsets are in da portfolio

Qualcomm is full of news at this year's Mobile World Congress. There are three important announcements the American company has...