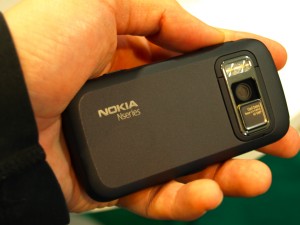 Nothing compares to actually putting hands on a new handset. No matter how much you read about a new piece of mobile hardware, there’s just no substitute for getting up close and personal with a new device. At a Nokia press conference held this morn, the Finnish cellphone maker unveiled their new Nokia N86 8-megapixel cameraphone to a small group of tech-enthusiasts – and we had a chance to play with the new Nseries multimedia slider.

As Dusan already pointed out, the Nokia N86 packs in an 8megapixel camera with dual-LED flash and Carl Zeiss Tessar optis, a crystal-clear 2.6-inch OLED QVGA screen, HSPA, GPS, WiFi, TV-out, compass, 8 GB of internal memory storage, and a microSD expansion slot. But, what the spec-sheet doesn’t convey is the quality of finish and build that we see in the Nokia N86.

The Nokia N86 resembles its slightly downrange sibling, the Nokia N85, with a dual-slider form-factor 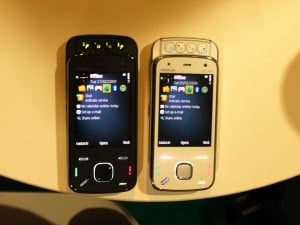 to slides up to reveal a keypad and down to reveal media controls (playback and whatnot). But, where the Nokia N85’s slider mechanism tends to feel a little loose and wobbly at times, the Nokia N86’s slider is rock solid and smooth. There’s absolutely no jiggle, no wiggle, not even a hint of play in the sliding mechanism. And, then there’s the tasteful metallic accents that highlight the handset’s place as a high-end Nseries handset. Combine all that with a build quality that’s unrivalled by any other handset (even from Nokia’s own product portfolio), and you’ve got a seriously badass cameraphone.

Nokia says that the 8-megapixel camera has been (and still is, as it undergoes continued refinement prior to launch) optimized to make the best use of the Carl Zeiss Tessar lens. Low-lighting conditions are no problem for the Nokia N86, as evidenced by a couple poster-sized night-shots that Nokia so proudly showed off at the press conference. The trick to making a great cameraphone isn’t just about pixel density, but overall camera performance (light sensitivity, shot-to-shot time, shutter lag, etc.) and Nokia takes that philosophy to heart.

LG and Microsoft announced an expanded alliance to increase the number of Windows Mobile-powered LG phones. As part of the...