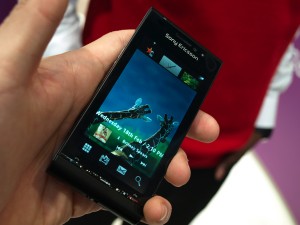 If you’ve ever handled any of Sony Ericsson’s metal-accented Cybershot cameraphones, you’ll have a good idea of what the Idou feels like in the hand. “High-quality” is a good way to describe the Idou’s fit and finish, but company reps told us that things would only get better as the Idou closed in on its final production status.

In the hand, the Sony Ericsson Idou feels a bit lighter than its size might suggest, but that might be due to the Idou’s early-prototype status. The handset is a bit thicker than we’d expect from a Sony Ericsson cameraphone, but then again, a 12-megapixel camera module isn’t exactly going to be small and thin.

Sony Ericsson's booth at Mobile World Congress wasn't as big as we remember it being last year, but was nevertheless...