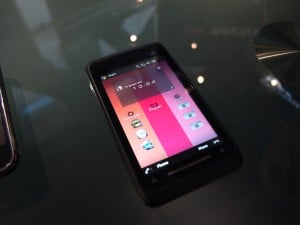 If you’re anything like us, you’ve been dying to see the Toshiba TG01 in real-world action ever since Tosh announced the Snapdragon-powered smartphone earlier this month. With an unbelievably fast 1Ghz processor and all kinds of multimedia processing hardware packed into its Snapdragon silicon, the Toshiba TG01 is easily one of the baddest smartphone to be announced in recent memory. The 4.1-inch WVGA touchscreen, GPS, WiFi, 3G data connectivity, and microSD card slot sound good on paper, but they really don’t do the handset justice.

So, to help give you an idea for just how slim, beautiful, and powerful the Toshiba TG01 really is, we decided to put Toshiba’s booth reps to work in helping to demonstrate this uber-smartphone’s strengths. The Toshiba TG01 isn’t just slim and sexy, its build quality is light-years beyond Toshiba’s previous smartphone offerings. Edges are rounded and the clean, minimalist design underscores the TG01’s elegant and practical industrial design. There’s just something about a dense and solid feeling device that really makes for a positive user experience, and the TG01 redefines what it means to be a “sexy” smartphone – notice the iPhone 3G looking a little insecure next to the not-as-homely TG01.

The Toshiba UI overlay shines as a finger-friendly alternative to the TG01’s Windows Mobile 6.1 underpinnings. Every smartphone manufacturer worth their salt these days are pushing their own Windows Mobile overlays in an effort to push the staid WinMo platform’s touchscreen appeal, and the Toshiba UI gets the job done well. It’s no TouchFLO 3D, but Toshiba clearly spent a good amount of time developing the Toshiba UI.

As a multimedia platform, the Toshiba TG01’s Snapdragon chipset outperforms just about every other smartphone on market. From smooth-as-butter high-res video playback to 3D gaming, the TG01 delivers, and then some. The integrated GPS navigation software ensures that you’ll never be left struggling to find your way around town.

Windows Mobile 6.1 Professional OS ran the show on the TG01 demo models, but we’re hoping (as did the Tosh reps) to see the Toshiba TG01 launching in the second half of 2009 with Windows Mobile 6.5 installed. And, seeing as how Microsoft has confirmed that Windows Mobile 6.5 won’t be made available as an update to existing WinMo6.1 users, we’re crossing just about every finger we can manage to cross…

After a whole lot of talk, Acer has finally entered the smartphone market with four handsets in a Windows Mobile...