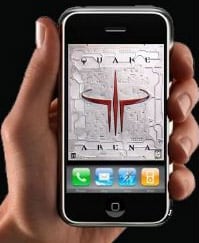 id Software will bring its popular first person shooter games to the Apple iPhone. Among the titles mentioned are such classics as Wolfenstein, Doom and Quake.

And while we’ve already seen some of the titles mentioned above ported to the jailbroken iPhones (i.e. Quake), this time we’re talking about the official thing, the one which will reach millions of iPhone and iPod Touch users around the world.

Apparently, the gaming company is working on improving the Quake III codebase to make it work on Apple’s handset. Moreover, in an interview regarding the browser-based version of Quake, Quake Live, id Software’s Jon Carmack said: “There are several of us that are poking around in our somewhat after-hours and discretionary time on things. It’s kind of exciting to look at that. We’re working with a more vanilla Quake III codebase.”

He went on to add: “But now that I’m thinking about all this stuff, if we turned this into a product, even if it’s not part of the Quake Live framework, we’ll probably go in and pick up all the tweaks and changes to the core gameplay and the levels that have been developed for Quake Live.”

iBoard is… the iPhone skateboard

This is getting ridiculous. I can understand there are some die hard Apple fans out there, but man, this gotta...