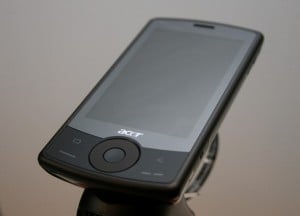 Hot on the heels of their Mobile World Congress announcements, Acer has announced four phones at CeBIT to be running Windows Mobile 6.5: the F1 with a 5 megapixel camera, the L1 a slider with alphanumeric keyboard, and the C and E1, both entry-level smartphones for €49 or less. These were alluded to at MWC, with dummy devices on display, but specs were in scarce supply. It’s cool to Windows Mobile 6.5 getting some early adoption among manufacturers, but it’ll be really interesting to see what they really do with it.

[via The Register, image via PocketLint]