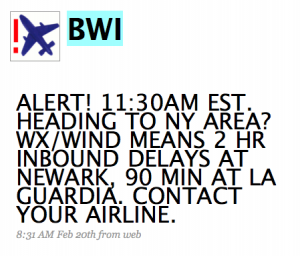 The once-obscure micro-blogging, social networking, me-centric service known as Twitter is really catching on in the mainstream. While many modern airports are working to bring cellphone-based electronic boarding passes into mainstream use, the next big thing in air travel might just be getting airports on Twitter. Case in point, Baltimore-Washington International (BWI) Airport is using Twitter to keep rushed travelers up to date with any potential travel-delays or parking nightmares.

In a world where just about everyone is connected to the mobile web through their cellphones, it makes sense for a busy international airport to leverage Twitter’s efficient alert-style service to send out updates in almost real-time. With 5 million users, and growing, Twitter’s user-base is nothing to scoff at – and definitely a force worth embracing. Twitter users need only “Follow” @BWI to get updates on airport and flight status.

It seems that the perfect modern airport these days will host international flights, allow mobile phones-as-boarding-passes, have ample power outlets and will post travel information updates via Twitter. What else would your perfect airport have?

Watch Out For Android on the Mobile Web Front

I was just looking over a post from Will the other day, in which he reported the clear dominance of...