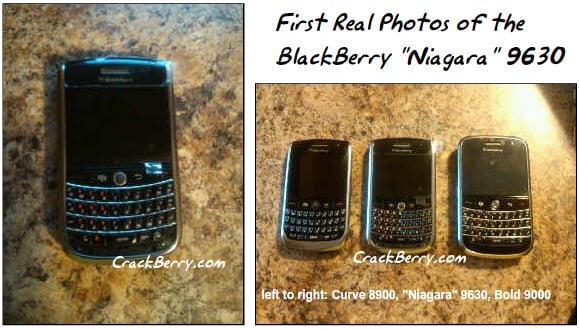 Well wouldn’t you know it, my bud CrackBerry Kevin managed to be the first to get his hands on the FIRST photos of the BlackBerry 9630 Niagara. Well done Kevin! The device is believed to be World Edition… is CDMA full-QWERTY and packs GPS, a 3.2MP camera, but sadly no WiFi (at least that’s what I’ve read thus far).

In the image above the 9630 is the device in the middle, sandwiched between the 8900 on the left and Bold on the right. She looks good. Sort of a ‘meld’ between the 8900 and Bold, at least in form factor.

Last night, blackberry.com/appworld went live, including notification page so you can get e-mailed when their new on-device software distribution channel...