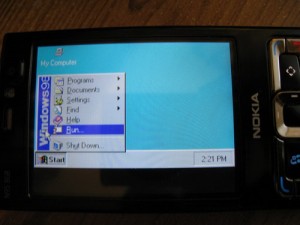 Seeing Windows 3.1 running on an already-aged Nokia N95 reminded us just how far we’ve come in the past decade, or so. Then there was that iPhone running Mac OS 7 (System 7). Mobile phones these days, smartphones especially, are jam-packed with more computing power than we would have thought possible before the turn of the century. So, then, are these handsets today capable or running more robust, power-hungry platforms? Maybe even Windows 98? It seems that way.

What you’re seeing here are pictures and video of good ‘ole Windows 98 doing its thing on a Nokia N95 and a Nokia N85. Both cellphones are part of Nokia’s high-end NSeries lineup, so it’s a given that both the Nokia N95 and N85 were up to the task of running Win98. Granted, things take a little longer to execute when you’re running your Windows 98 desktop off of a Nokia N85, but just the fact that we can remember desktop boot-times on par with what you see in the video is just astounding!

If you're the type to strive for a connected and mobile life, the cellphone in your pocket is likely a...