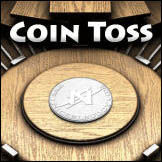 Here’s a freebie for all the BlackBerry addicts out there today. The folks at Nickel Buddy Studios have just released a free app called ‘Nickel Buddy Coin Toss’… Pop open the app to simulate a coin toss, which randomly generates a result of heads or tails.

Thankfully there are two versions of the app, one for OS 4.2 or higher, and another for BlackBerry Storm users. To check it out for yourself hit up the MobiHand Store >

A little while back I wrote a brief summary of my thoughts as regards the Storm, having had just five...