According to some documents from Global Certification Forum (GCF), Toshiba may have one more powerful phone in the pipeline. The organization has recently received approvals for two Toshiba handsets: the already known “TG01” and one device GCF calls “To Be Advised.”

As we look at the specs of the two phones (image bellow), we see that both the “TG01” and “To Be Advised” models are identical. The difference is in the GCF number: TG01 has the GCF number 1706, while the other device has number 1715. 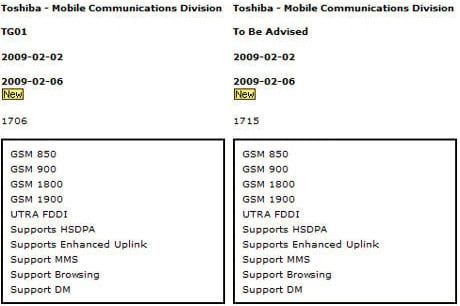 Nothing is certain at this stage, but maybe just maybe, we’re talking here about the mysterious Toshiba device that recently passed the FCC hurdle. On the other hand, the Japanese company may introduce a brand new device with TG01-like specs, which (and now I’m going way into speculation) runs Android — Toshiba is a member of the Open Handset Alliance, after all. Waiting and seeing is all we can do at this stage…

Following up on the specifications posted last week, we've got some LG Viewty 2-flavoured eye candy. The specs haven't changed,...