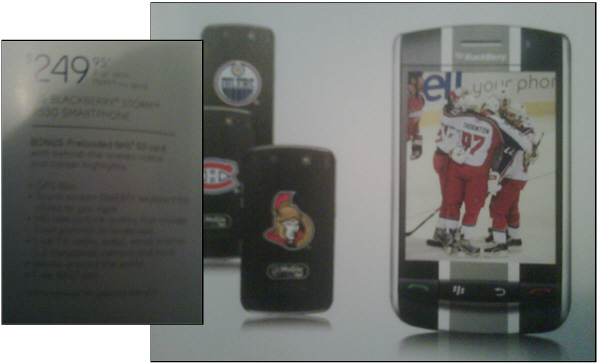 What do you do when you want to make more money and sell more BlackBerry Storm devices up in Canada? Well you brand the Storms with NHL logos and graphics for a team of the customers choice of course!

It looks like Bell will be offering NHL-themed BlackBerry Storms to their customers. They are getting ready to launch the 9530 in NHL liveries for the Canadian public. The new package will include an NHL-themed skin for a team of their choice, plus a Storm chalked-full of preloaded NHL goodness. To pick it up, you’ll pay $249.95 CAD on a 3-year term… That’s $50 over the normal pricing at Bell. But heck who cares, I know these will sell. I’m predicting a lot of Montreal Canadiens Storm devices to fly out the door in the weeks and months ahead.

Package details from the shot above:

PLUS Bell is running a contest to get people subscribed to their Unlimited NHL service. It runs around $8 per month. The skinny on this:

Subscribe to Unlimited NHL for as low as 8 dollars a month before April 12, 2009 and you will be automatically entered for a chance to win a Stanley cup price pack including:

Hockey fans, get ready to strap on your blades and head over to a Bell store real soon.

If you're anything like me, you use Ticketmaster from time to time to pick up event tickets in your area....