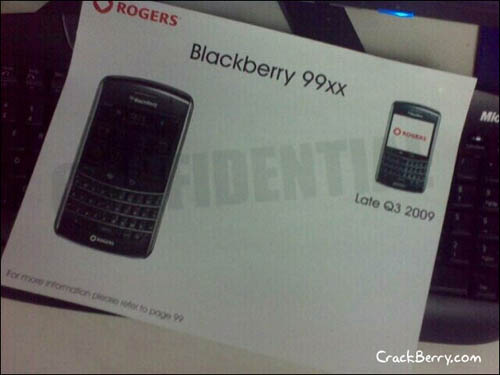 To follow up those fantastic images of the BlackBerry Niagara 9630, there’s more BlackBerry goodness to go around this morning… In the form of the first real images of a BlackBerry 9900. In the past this device was known as ‘Pluto’ (for those following the Berry rumor mill).

The 9900 looks to be a Bold style device with a SurePress Touchscreen. It’ll pack 3G speeds, and most of the same ‘guts’ as the Bold, but you’ll notice one very notable difference… There’s no trackball on the device! This of course is due to the touchscreen interface on the 9900, but part of me is for some reason wishing that there will be a scrollwheel on the side of the device just like my trusty old BlackBerry 8700 🙂 Tired of the touchscreen? Use the scrollwheel! 😛

Look for the BlackBerry 9900 by Q3 or Q4 of this year. Stay tuned for more on this new device from RIM.

Detailed Images of the BlackBerry 9630 Niagara

Looks like my bud Kevin has been busy this morning with some awesome stuff for the Berry fans in the...