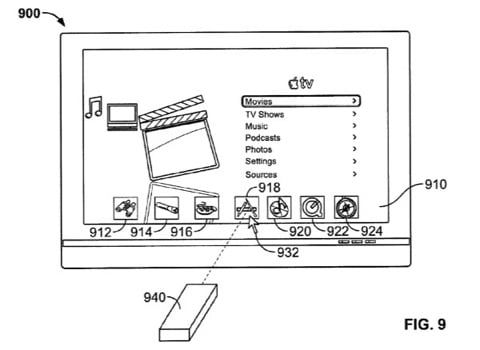 As we all know from a lot of reported news, Apple has had mucho success with games on the iPhone – and it looks like they might be extending that to Apple TV in the near(ish) future….

CNET is reporting that a set of patents filed at the USPTO shows a wireless controller for the Apple TV that could be used for a number of things. As you can see from the image, it looks like there are a bunch of Apps on the screen…. but whaddabout games games games?!

The Apple TV hardware is a pretty potent bit of kit, and shares a lot in common architecture-wise with the iPhone – so how much porting do we think would be needed to get games rendering from the little wonder? Probably not much!

Of course, this wouldn’t be a heavy-duty gaming device – people would probably still use their XBOX360s or PS3s – but as a casual gaming device (the type of gaming I find myself doing more and more these days during snatched free moments), it could all of a sudden be a contender!

There are also of course the rumours that won’t go away about a new Apple TV device, which will include some form of DVR, perhaps a tuner, and maybe some kind of drive – granted, that would make it a bit like a Mac mini, but then again, Apple do have a habit of introducing game-changers… let’s see what comes next!

[Via: CNET via PC World / Image via USPTO]

It seems that embracing the mobile market, especially iPhone users, has helped boost Clear Channel's audience by 15%. With over...