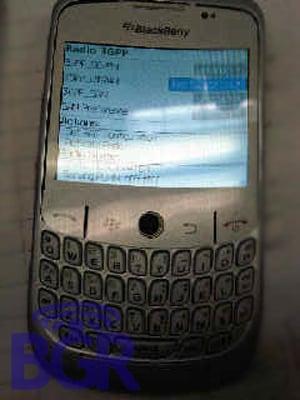 The next stab at the Curve line after the 8900 Javelin has made its inaugural appearance, and not really wowwing anybody. It’s essentially a dummed-down 8900 with some new stylings, like a flush softkey/screen face, white colouring, and a gimped screen and camera. Here are the preliminary specs:

The possibility of n-class Wi-Fi is interesting (definitely one of the questions that came to mind when I was talking with the Wi-Fi Alliance), and sounds like it will be the defining characteristic of this new –25 category of BlackBerrys. iDEN recently claimed –50, which shows RIM is finding new ways to segment their products now that Wi-Fi and GPS are becoming a baseline standard. The first we heard of the Gemini was in February, alongside rumours of an eventual T-Mobile launch, but it’s hard to imagine how this will compare to the 8900. It might be going the Pearl Flip route and trying to stay as cheap as possible – perhaps even match existing Curve prices. Only time will tell on this one, folks.

Sony Ericsson has accidentally (or not) leaked a profile file of the still unannounced device - W518a. From what we've...