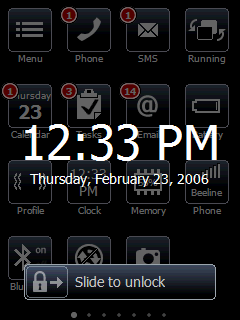 VITO Technology has recently released an update to its popular Windows Mobile user interface application – Winterface. Version 1.3 fixes some of the known bugs — such as the bug related to SMS alerts and the weather icon — but also adds few extra features. For instance, now you place URL shortcuts on the homescreen, just like on the iPhone, and specify which browser should open the defined web pages (hint: it doesn’t have to be Pocket Internet Explorer, Opera Mobile is always a better option on WinMo). In addition, there’s a new light skin (along with the black skin) included in the mix along with few additional options. That said, now you can show or hide the standard Windows Mobile “Start” toolbar. Somehow, I prefer seeing this row at the top as it contains some useful information like the time profile of the phone and a mobile operator name, which is particularly useful when in roaming.

Enough said, considering that we’ve already covered Winterface in the past. VITO Technology’s website has more information and from there you can also purchase the application.

TaxiFlasher iPhone app helps you get a cab without yelling

TaxiFlasher is a neat app designed to help iPhone/iPod Touch users get a cab without yelling "Taxi, taxi" on the...