Sprint cleaning? Perhaps. AT&T is apparently looking to move a good number of iPhone 3G stock over the next month or so. Internal training documents point to a renewed iPhone 3G sales push that will have Big Blue peddling iPhone 3G’s without contract to existing AT&T customers. The new promotion will give current subscribers with an active AT&T line the option to buy an iPhone 3G free and clear of any contractual commitments. The news comes on the heels of Apple’s iPhone 3.0 OS preview event and might even signal an oncoming hardware refresh. 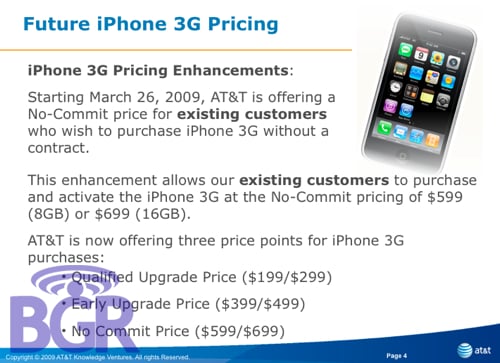 Starting March 26th, AT&T will offer the 8GB iPhone 3G for $599 and the 16GB iPhone 3G for a wallet-busting $699. Unfortunately, the AT&T iPhone 3G will only be offered free of contract, but will remain locked to AT&T’s network in the US.

More provocative, however, is the possibility that AT&T is preparing for an upcoming hardware launch from Apple. Carriers, like AT&T, have been known to clear out current stock in anticipation of a next-generation device coming down the short-term pipeline. If true, AT&T’s move to sell contract-free iPhone 3G’s may be an indication of Apple’s intent to introduce a new iPhone or a refreshed iPhone 3G. There has been a good bit of speculation surrounding Apple’s plans for an updated or next-generation iPhone, and AT&T may be looking to clear out some of its inventory before the new hotness drops.

Remember, the off-contract pricing on the iPhone 3G is only available to current AT&T subscribers. So, if you still don’t have an iPhone 3G, here’s your chance. Or, you know, buy one for your mother, she’ll love you for it… not that she didn’t anywya.

Palm has just unloaded chapter 2 of their official developers guide: Application Basics. Keep in mind, this is a Rough...