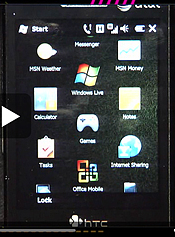 Microsoft really is working hard to give their touch-optimized Windows Mobile 6.5 update everything it needs to capture a good chunk of the smartphone market. In fact, Microsoft is even working to ensure that it ditches design elements that aren’t expected to be received well by the public. In that vein, Microsoft is reportedly cutting the honeycomb application launcher from the Windows Mobile 6.5 homescreen.

We mentioned previously that Windows Mobile 6.5’s UI looked entirely too gimmicky and more like a bad touchscreen patch-job than a truly touch-optimized UI. And, it seems Microsoft agreed (if not with us, then at least with the general consensus). WMExperts noticed the updated WinMo application launcher during a WM6.5 presentation. The honeycomb design has been replaced with a more subdued (and professional) layout that emphasizes the larger application icons rather than the honeycomb styling. The icons are still staggered to avoid hitting the wrong icon.

The updated application launcher aesthetic is much cleaner and more in tune with the rest of Windows Mobile’s design philosophy. We’re not sure everyone will feel the same way, so hopefully Microsoft will offer some built-in Windows Mobile skins or themes.