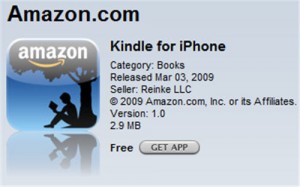 In a strange twist of fate, Apple’s move to regain ground lost to the Kindle by pushing the iPhone as a legitimate eBook reader has earned it a new lawsuit for violating an eBook patent filed seven years ago. eBook pioneer Amazon is meanwhile clear to keep peddling its Kindle Reader. Apple is being sued by Swiss company MONEC Holding Ltd. The lawsuit was filed in a Virginia court on Monday, accusing Apple of patent infringement, unfair trade practices, monopolization, and tortious interference in regards to its “Electronic device, preferably an electronic book” patent from January 2002 ( 6,335,678 ).

At issue is the iPhone’s ability to download and display digital, electronics books. Because Apple controls what iPhone apps get into the AppStore, the availability of eBook iPhone applications, like Amazon’s Kindle app, in the iPhone AppStore has led MONEC to claim that Apple is violating its eBook patent.

The eBook patent outlines a “light weight” electronic device with a “touch-screen” LCD display and a “flat, frame-like” housing. The description does seem to fit the iPhone’s general design, but doesn’t necessarily mean Apple is violating MONEC’s eBook patent. Other language in the patent describes a device with dimensions on par with a sheet of paper and capable of reproducing a book’s page at “normal size” – clearly not a fitting description for the iPhone.

MONEC is seeking compensatory damages, legal fees and an injunction against Apple peddling the iPhone as an eBook reader.