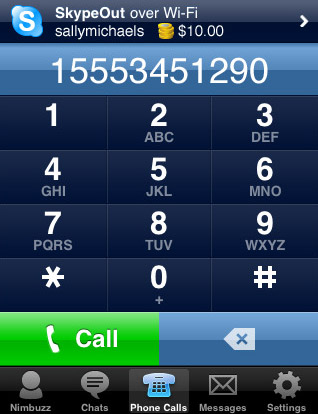 The multi IM network client Nimbuzz for iPhone has been recently updated. The new version of the application introduces dial-pad and the ability to make VoIP calls to landlines and mobiles via SkypeOut, and Nimbuzz’s major SIP provider partners including Gizmo5, Vyke, and SIPgate over Wifi. As a result, even the iPod Touch could be used for taking and making phone calls!

What’s also interesting about this release is that the available credit is shown on the dial-pad when using SkypeOut, which is kinda neat.

So if you still haven’t tried out Nimbuzz on your iPhone, now’s your chance. As a reminder, you can also use it to stay in touch with your buddies on multiple IM networks (Windows Live Messenger, Yahoo! Messenger, ICQ, Google Talk, AIM) and social networks such as Facebook and MySpace… Here’s an AppStore link from where you can grab the app.

Android Market starting to take off in a big way; Filtering options are needed!

The inclusion of paid apps to the Android Market seemed like a great move by Google, as users have started...