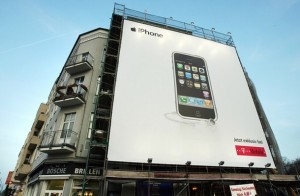 Ad for a mobile phone. Not a mobile ad. Close enough...

Smartphones, especially touchscreen smartphones are starting to gain traction in the mobile advertising world. A new study has found that fully one-third (33%) of all mobile advertisement requests were made by smartphones in February 2009, up from 26% the previous month. More specifically, AdMob’s monthly Mobile Metrics Report has found that touchscreen smartphones like the BlackBerry Storm and T-Mobile G1 led the charge for the BlackBerry and Android OS platforms, respectively. And, with the Apple iPhone and Samsung Instinct leading the pack for AT&T and Sprint, it’s clear that touch-based smartphones are becoming increasingly more popular.

As the smartphone segment grows, we’ll likely see touchscreened handsets leading the way in terms of overall mobile web and advertising consumption. Advertisers are already looking for new ways to engage potential customers with interactive touch-based adverts, and this latest data will likely drive even more touch-optimized mobile ads. Depending on which side of the marketing-fence you’re sitting, the future of mobile advertising looks incredibly exciting or really, really annoying.

LiveFire uses Quake 3 engine to blow our iPhones away!

iPhone gaming is here, and it's here in a big way. As such, hardcore gamers may just have a new...