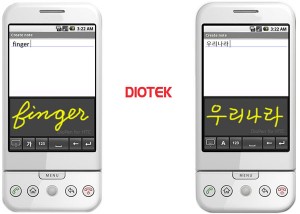 Korean developer Diotek has launched their new handwriting recognition app for the Android G1. Character recognition is something of a necessity in oriental markets, but support has yet to be built in to Android handsets. Chinese manufacturer Qigi has been working on an Android phone which will hopefully make use of a stylus and have full-bodied language support, but until then, third-party solutions like Diotek’s will have to do. If Diotek really wanted to cash in before native language support caught up, they would start cramming other languages into their software other than just English and Korean.

CTIA is just around the corner. And you know what that means - product launches galore! Opera has announced that...