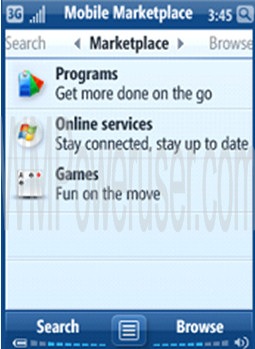 Yet another batch of Windows Mobile 7 screenshots has hit the blogosphere. Windows Mobile 6.5 and its more touch-friendly interface isn’t even live and it looks like Windows Mobile community is already looking ahead to Windows Mobile 7. This latest WM7 leak depicts the future mobile operating system’s Zune interface, Windows Marketplace and the Instant Messaging UI. Zune integration was recently confirmed for WinMo 7, giving more credence to these particular screenshots.

As with the previously leaked WM7 screenshots, the new UI apparently lacks any “Start” button or menu. In fact, it looks nothing like the Windows Mobile we all know and love use. From what we can see, the WinMo 7 interface looks not-half-bad, maybe even good(?).

Windows Mobile 7 is presumed to be in early-stage development but it’s already looking more and more like the touch-optimized mobile operating system we knew Microsoft could design. It may have been a little much to hope for a more refreshing design in Windows Mobile 6.5, but it’s good to know that Windows Mobile 7 will look and feel more like a touch-based mobile OS and less like a confused mini-version of Windows.

Keep it simple. That's Apple's guiding design philosophy in everything they do, the iPhone included. In its latest bid to...