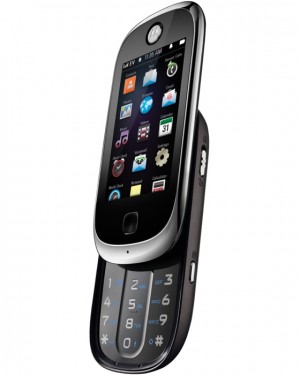 The Motorola QA4 Evoke sports some fairly decent features. It’s no smartphone, but with its iPhone-like widgets, a touchscreen display and full-HTML browser, the Evoke is certainly a refreshing change of direction from Motorola’s handset designers. It’s obvious that Motorola’s Evoke takes many a design cue from Apple’s iPhone, and that all-too-familiar widget-based homescreen certainly evokes images of the iPhone OS. But, that may be a good thing for Motorola.

For too long Motorola has been struggling to design their own brand of trend-setting handsets. It may be that the success of the RAZR all those years ago has been something of a mental-block for Motorola’s designers – they just can’t seem to think outside the RAZR-box. But, the unveiling of the Evoke could be signalling a change in Motorola’s design perspective. Motorola seems to be embracing industry trends, the Evoke seems to be an attempt to key-in on what makes handsets like the Apple iPhone and Samsung Omnia so popular. It’s likely to be a slow process, but the Evoke gives us hope that Motorola can turn things around. In the best-case scenario, we may soon see the end of RAZR-like angles and less-than-cutting-edge technology coming out of Motorola’s R&D labs towards the end of the year.

The Evoke is far from the power-packed, sleekly designed smartphone that we’d all love to see come from Motorola. But, it’s a damn good first step!

The HTC Touch Diamond2 is widely expected to continue the success that HTC has seen with its original HTC Touch...