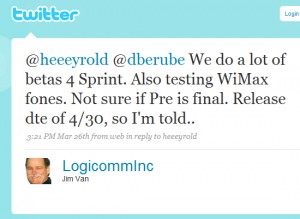 Could it be? Are Palm and Sprint really far enough into their Palm Pre launch preparations that we may actually get a chance to own the powerfully svelte new smartphone from Palm next month? The latest word on the street has Sprint launching the all-new Palm Pre as soon as April 30!

The Palm Pre launch rumors started when Logicomm Inc. CEO Jim Van posted a Twitter message alluding to the April 30 launch window. We’re not too quick to pick up random Twitter traffic as legit rumor sources, but a little digging has confirmed that Jim Van is apparently in a position to be privy to launch information. Van has presumably been testing the Palm Pre for Sprint and has been told that the April 30 launch goal is “a line in the sand.”

April 30, here we come! (Unless this is all a big hoax or someone is faking Jim Van’s Twitter account)

[Update]
Jim Van claims that a non-Sprint source has confirmed the Palm Pre’s on-contract price at $299.

[Update 2]
There has been some Twitter fall-out regarding the rumored Palm Pre April 20 launch. @davidciccone claims that Palm contacted him to let him know that Jim Van is a fake. There’s also talk of the April 20 launch date not falling on Sprint’s usual Sunday launch schedule.

Keep in mind that launch windows are flexible and that April 20 may be more of a loose launch schedule to look forward to.

Spring conference season is in full swing, and you know what that means. New product launches at CTIA Las Vegas...