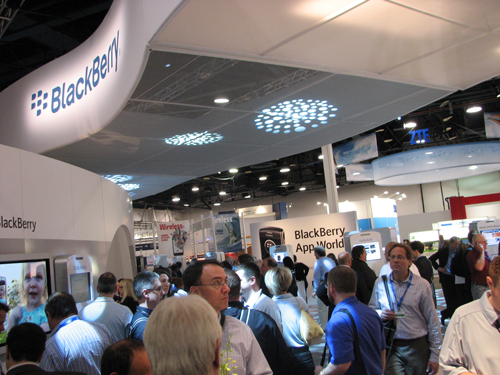 Research in Motion had their hands full at CTIA with the BlackBerry App World launch, which is ostensibly the biggest announcement of the show. Of course, RIM was showing off their full assortment of devices, but even the latest, the BlackBerry 8230 Pearl Flip, wasn’t anything more than a CDMA twist on the GSM version. RIM’s partners populated the booth in usual style, including the freshly-acquired folks from Chalk, some fellow Ottawa homeboys from Magmic, and plenty of others. The Movela Netflix manager looked especially cool, and they’ve got a Craigslist app coming sometime this summer based on the same platform.

Accessories were seeing a lot of attention at the booth, namely the car visor first spotted at the CES. The visor is yet another fine addition to RIM’s growing accessory lineup (although I have a thing or two to say about their “premium” earbuds), which shunts music from your BlackBerry to your car stereo via Bluetooth and FM tuning. Hands-free functionality lets you answer calls over your car stereo as well – very nifty. They went public with a $99 price point for the visor and it should be on the market in late June. The Remote Stereo Gateway, Unify4Life and Slingbox had a solid presence at the home theatre demo area, showing you just how many ways BlackBerry plugs into your home. Overall, RIM had a good show, but excitement was cut short since we’re still holding out for a BlackBerry 9630 announcement at WES in May.  For more info on the BlackBerry App World, be sure to tune in to this week’s CTIA Wireless Edition of The Signal, where we chat up RIM VP of Developer Relations, Mike Kirkup.

One of the gems of the CTIA Wireless 2009 show is Samsung. There's a surprising lack of manufacturer and carrier...