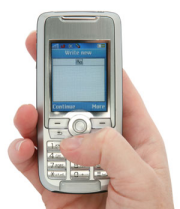 Compared to the 363 billion text messages sent in the US during 2007, it seems that the US has seriously ramped up per-person use of text messages. Carriers are no doubt enjoying the messaging boom, as 2008 racked up more than $32 billion in data-services revenue. That makes for a 37% increase in year-on-year revenue.

According to the CTIA’s Semi-Annual Wireless Industry Survey, there are more than 270 million wireless subscribers in the US today. With about 3.5 billion SMS text messages sent every day in 2008, the math works out to each and every American wireless customer sending 13 messages per day. Of course, averaged figures like this are skewed by girls that send over 14,000 messages a month.

So, how many text messages do you send every day?

Celio, the company behind the popular REDFLY mobile companions/terminals, has recently announced a public beta of the new REDFLY Mobile...