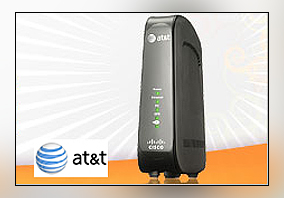 It looks like AT&T is finally starting to ramp up their efforts to roll-out their own femtocell solution to market. Following on an iPhone firmware update that made the iPhone and iPhone 3G compatible with AT&T’s femtocell, AT&T is reportedly looking to kick of trials of their AT&T 3G MicroCell this week.

The AT&T 3G MicroCell, despite its name, is a femtocell solution that blankets your home or office with 5,000 sq. ft. of wireless 3G coverage. The femtocell ferries all communications from your phone and to the carrier’s network through a high-speed internet connection. Think of a femtocell as a mini cell-tower packed into a device no bigger than a cable modem.

AT&T is trialling the 3G MicroCell solution in select markets. Starting this week, lucky participants will be offered $200 and a free 3G MicroCell in return for their trial-participation. AT&T will apparently be trialling the MicroCell through June 9, which bodes well for a mid-Summer launch of the AT&T 3G MicroCell.

The AT&T 3G MicroCell allows up to 10 AT&T handsets to connect to the femtocell simultaneously. Even better, the MicroCell allows users to use 3G voice and data services simultaneously – just as if you were standing next to a 75-foot cellular tower. If things go smoothly, reception-seeking AT&T customers may be able to flood their homes with 3G airwaves.

The Sony Ericsson AB900 car speakerphone and the MBS-900 Bluetooth speaker have kicked the bucket, according to their online store....