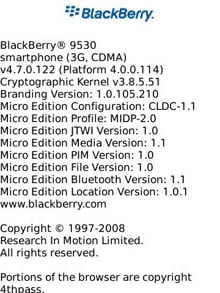 I noticed late last night that OS 4.7.0.122 had come out, and sure enough, this morning more details have surfaced on this one. Seems as though Bell has released OS 4.7.0.122 for customers using the BlackBerry Storm. Normal procedure would allow users to hit up the BlackBerry downloads page to get the installer and upgrade. Non-Bell customers in the past could do this as well, simply by deleting the vendor.xml file. This time though, no installer was posted, which makes things a bit more difficult. The download is available only via the Desktop Manager, which will throw a wrench into the coggery for anyone not on Bell.

Now, while this is an ‘official’ release from Bell, I would not recommend an updgrade to anyone out there if they do not know what they’re doing (this is always the case of course, but especially with this one).

For more information and to grab the downloads, head over to this handy thread in the CrackBerry forums. For everyone else wanting to play it safe… Grab a coffee and wait for the next release!

Truphone goes for the U.S. market

During the recently ended CTIA in Las Vegas, Truphone announced that it is entering the U.S. market in a big...