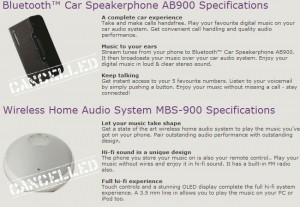 The Sony Ericsson AB900 car speakerphone and the MBS-900 Bluetooth speaker have kicked the bucket, according to their online store. The speakerphone made its entrance a little over a year ago, but that Bluetooth speaker was only out since November; that’ll make a nice little collector’s item for those who picked on up. The cut isn’t surprising, since their handset sales have been suffering as of late, but those were still some cool toys to let go. RIM is working on releasing their own car visor this summer – here’s hoping it enjoys a better fate than Sony Ericsson’s.

You can pay your respects to videos of the dearly departed here and here.