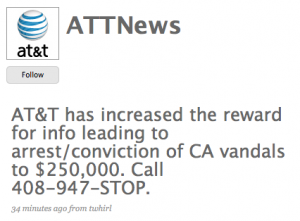 You know Twitter is getting big when a huge telecom giant resorts to using the micro-blogging service to keep customers informed during service blackouts. Following a cable-cut situation that left Santa Clara, CA. and San Jose, CA. residents without their daily YouTube and NSFW-fix on Thursday, AT&T used their Twitter account to send out updates to a few thousand, or so, customers.

Twitters ability to send out real-time messages, limited to a bite-sized 140-characters, to those in its social network (those following @attnews) proved a useful tool to keep AT&T customers updated throughout AT&T network downtime snafu. As of this morning, AT&T announced, via Twitter, that their network services were operating normally. If AT&T’s tweets are to be believed, vandals are to blame for AT&T’s network outage.

The latest AT&T tweet updates customers to a reward-increase that would give $100,000 to anyone providing information on the network vandals that leads to an arrest/conviction. Tips can be sent to “408-947-STOP.”

As we wait for Apple to drop new iPhone hardware on us come this Summer, we can't help but to...