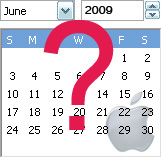 This latest speculation bodes well for a mid-June launch window, which has been somewhat confirmed through component supply checks. Interestingly, we’re told that the new iPhone shipments will apparently include three new iPhone models – a new EDGE handset, a 3G variant and a China-only iPhone, presumably with support for the Chinese TD-SCDMA network.

The big take-away here is that the new iPhone (or iPhones) is headed to market sometime in June. With a build-order for 4 million new iPhones, Apple seems to be expecting some incredible sales volume throughout the next-generation iPhone’s launch-quarter.

Acer senior VP James T. Wong has admitted that they maybe, sorta, might have an Android-based desktop computer in the...