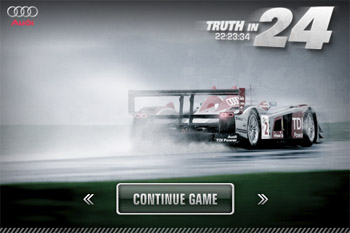 Their first iPhone application, Audi A4 Driving Challenge, was obviously a success (nearly 3.2 million downloads) when we see them releasing another one. Yap, we’re talking about the famous car maker Audi, which has a new offering in the AppStore.

The so called Truth in 24 driving app “challenges iPhone and iPod touch players to monitor fuel use and tire wear just as Audi Le Mans teams do during races.” The “exceptional graphics” is also included, making sure iPhone/iPod Touch’s CPU is almost completely busy while playing. The game also features multiple courses and this time you’re racing from the driver’s point of view.

According to the official release, the Truth in 24 relates to the same-name documentary produced by NFL Films and Chicago-based Intersport, which follows the dramatic 2008 bid by Audi racing teams to retain their dominance at the grueling 24 Hours of Le Mans endurance race…

Enough said. We’re talking about a free app here, so there’s no reason not to download it. Here’s an AppStore link.