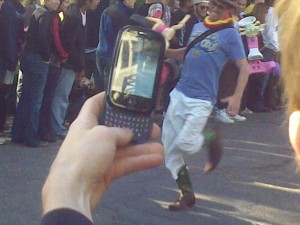 Like Apple, Palm needs to hype the Palm Pre to stratospheric proportions. Palm needs the Pre to be the biggest hit it’s ever had on its hands, and there’s no amount of TV ad-blitzing and talk-show fluffery that’s going to give the Pre the kind of momentum it needs to pull Palm and Sprint from out of the gutter. As such, we think these latest pics of the Palm Pre are just the start of Palm’s new viral marketing push.

The back-story on these latest Palm Pre pics has these two unassuming chaps wielding bona fide Palm Pre smartphones in the wild. They were spotted snapping pics of the “Bring Your Own Big Wheel” race in San Francisco, and have been “reportedly” using the Palm Pre for a couple weeks. Apparently, the Palm Pre wasn’t initially as impressive as it has become after a few software updates.

Take it at face value, or try to infer some underlying motive, it’s your choice. We wouldn’t mind seeing more viral Pre advertising in the near future.

The US smartphone market might have been a little too much for rookie smartphone maker Dell, but that doesn't mean...